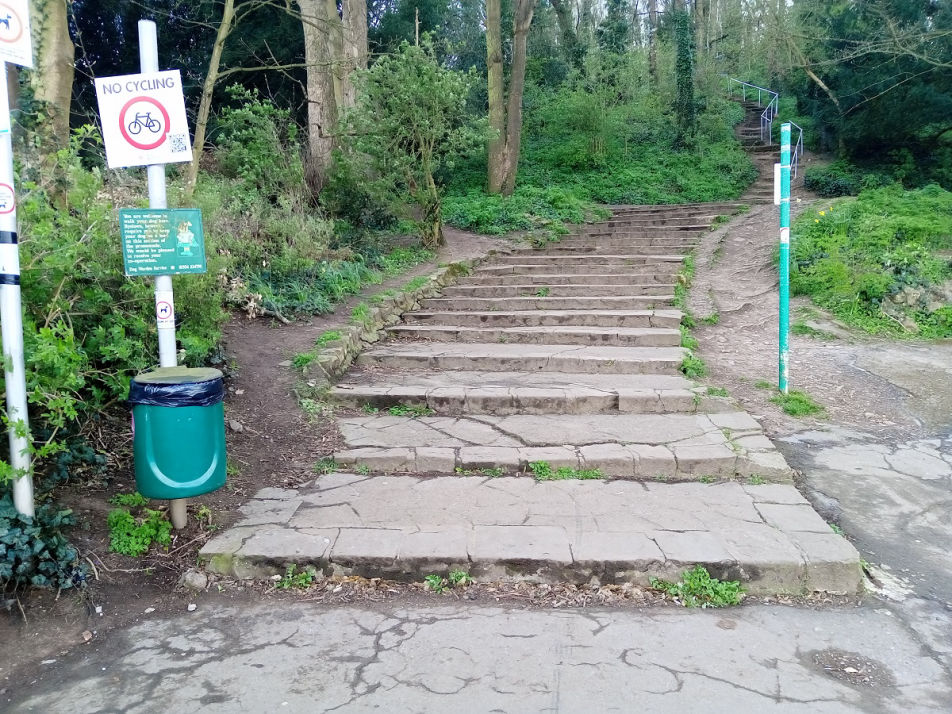 At its April meeting Clevedon Civic Society Executive approved expenditure on a project to commemorate its 50th Anniversary.

The money will come from funds accumulated by the Civic Society over a long period, mainly generated by its members writing, publishing and selling books of local interest.
It is therefore most important for us to mark this anniversary with a project of some cultural significance to the town, and which will above all have longevity.

After considerable discussion The Society decided that upgrading the appearance of the flight of steps leading to Poets' Walk at the southern end of Marine Lake and marking the significance of Poets Walk to the Town would satisfy the selection criteria very well.

With the agreement and cooperation of North Somerset Council we will remake 10 of the stone steps, with granite and textured concrete. Each of the new steps will have a line of poetry from “IN MEMORIAM AHH” by Alfred Lord Tennyson, carved into the vertical granite face.

This Poem commemorates the return of Arthur Hallam for burial at St Andrews Church after he died in Vienna in September 1833 at the age of 22. Arthur Hallam was the grandson of Sir Abraham Vth Baronet of Clevedon Court and a friend of Tennyson. In the following years the public responded to the themes of talent and friendship tragically cut short, and the poem became nationally well known. By the time the railway reached Clevedon, people were flocking to visit the memorial to Arthur Hallam in St. Andrews Church.

We hope that this will resonate with present day residents and visitors, some of whom may wish to find out more about the history of the town, and others who will be moved by the experience of reading these evocative lines in the landscape of the Severn Estuary which inspired them.

With the increasing emphasis on the use of our green spaces, this project is timely, especially so as it forms part of the coast path which we hope will soon connect Clevedon and Weston super Mare.

Further details of the project will be released in due course; progress will be detailed on the 50th Anniversary pages as and when the various stages of the project are completed.

PROJECTS (In the past 10 years approx) working with North Somerset Council. Clevedon Town council and other voluntary organisations.

See the details on the Pier Copse page.

- Donation towards cost of restoring walls.

See the details on the Wain's Hill Battery page.

- Preparation of drawings to enable restoration work to be priced.

- Advice to reduce tender sum to align with budget to enable the contract to proceed.

- Design and financial contribution to construction.

- Design and financial contribution to construction.

See the details on the Lookout Project page.

- In memory of Lady Elton, our past president.

SURVEY OF SEATS AND BENCHES.

- At the request of North Somerset Council we carried out a survey of the condition of public seats and benches in the Town, so that those in a poor state could be replaced.

- A plan of all the green spaces in the Town . The information is to be used in the preparation of the Neighbourhood Plan.

- Volunteers also carry out regular litter picks and clearance of plastic waste from the sea side.

PREVIOUS SCHEMES, carried out more than ten years ago include:

- Restoration of all the Drinking Fountains, detailed here.

- Restoration of the Victorian Shelter on the Green Beach, detailed here.

The Footpaths Group, in addition to their usual walks programme, also perform the following tasks:

- Condition Survey of Clevedon footpaths over a 3 year rolling programme.

- Survey footpath signage and working with NSC to replace signs as necessary.